An afternoon tea packed with savoury delights, scones, sandwiches and sweet treats, The Kensington launches new ‘London Landmarks’ Afternoon Tea. Paying homage to some of the city’s best-known architectural feats, you can now eat your way through a carrot cake version of The Shard and a towering lemon curd tart shaped like Big Ben. Complete with speciality teas and a glass of bubbles to wash it all down… 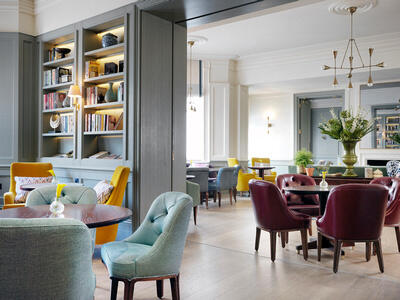 Served daily from noon to 6pm at Town House, The Kensington’s new ‘London Landmarks’ Afternoon Tea celebrates the best of London. The tea is the hotel’s hottest new offering and includes a mouth-watering array of culinary treats to tantalise your taste-buds.

The ultimate setting for a relaxed afternoon, Town House is spread out between three drawing rooms and is located in the heart of the Royal Borough of Kensington. The classically designed period rooms, wrapped in wood panelling, parquet flooring and glorious bay windows, offers a luxurious setting for tea.

In addition to a delicious menu of sweet and savoury treats, the tea is served alongside a bespoke illustrated map of London by Eleni Sofroniou, which guests are able to take home, providing a wonderful memory of their special day. The food itself is presented on a London Eye-inspired tea stand, where you’ll find an array of sandwiches including Campbells & Company smoked salmon with lovage pesto and cream cheese on brown bread, an egg and cress bridge roll and marinated cucumber. The tea’s savoury course celebrates classic British dishes inlcuding a Colston Bassett Stilton and broccoli quiche, a crab cake and a steak and London ale pie, straight from East London.

The sweet treats are the star of the show, created to embody famed London landmarks, it is hard to tuck into them, in fear of ruining their structural beauty. Harder to resist, however, is the white chocolate coated ganache construction of The Gherkin, which you’ll be biting into in no time. Served alongside The Gherkin is The Shard, crafted out of carrot cake and milk chocolate. If that wasn’t enough, iconic London Telephone Box is also on the menu, reimagined in a light rhubarb mousse, as well as a Big Ben lemon curd tart. You’ll be drooling just looking at this selection. 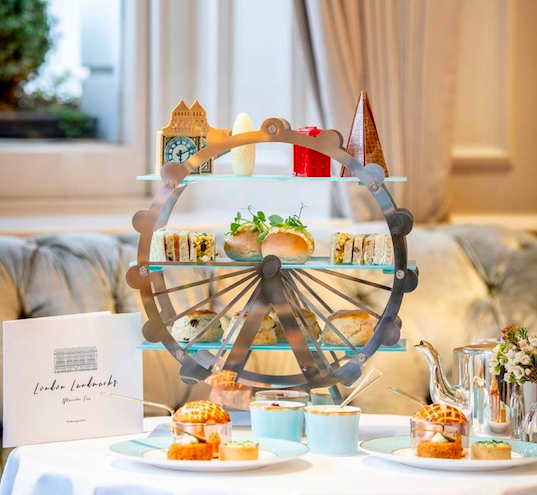 A selection of fruit and plain scones are also on offer, served alongside Heather Hills strawberry jam and a generous serving of rich, thick clotted cream. And if you’re gluten free, there is a full menu void of any gluten, with sandwiches made from coeliac-friendly bread and even specially-made scones.

Not to mention the tea, provided by The Rare Tea Company, an independent company based in London. Tea leaves are bought directly from the farmers, where sustainable practices are upheld, benefitting the land and the people living on it. Choose between refreshing and fragrant Earl Grey tea sourced from Satemwa Estate in Italy, Cloud Tea from LaKyrsiew Garden in India or Dragonwell from Hangzhou, China. Herbal infusions are also on the menu, including English Chamolile from Cornwall and Wild Rooibos from South Africa.

This incredible new offering can be booked at £42 per person or £54.50 with a glass of Perrier-Jouët, Grand Brut NV Champagne. There’s no afternoon tea like it.