“London’s where I was brought up. It’s where my heart is and where I get my inspiration.” 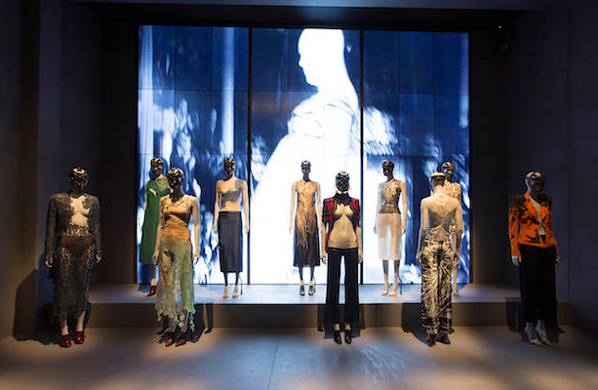 Since the New York Metropolitan Museum of Art held a retrospective of the infamous designer’s work in 2011, the fashion world has been counting the days until the exhibition opened in London, Alexander McQueen’s adored home.

On March 14th, the V&A opened its doors and welcomed visitors to one of the most hotly anticipated shows to ever grace its hallowed halls.

And it doesn’t disappoint.

The show takes you on a journey through McQueen’s work, from his 1992 MA graduate collection to the unfinished A/W 2010 collection. Most of the pieces are not behind glass, and his designs are so close, and so tactile, that it’s all you can do not to reach out and touch them. Soft feathers line exaggerated dresses and jackets, while wistless silk chiffon billows in waves.

The retrospective begins with some of his earlier work, focusing on his exceptional tailoring abilities. If you’re not familiar with the early career of McQueen, you might be surprised to know that he was, first and foremost, a tailor, who trained with military tailors and theatrical costumers.

“You’ve got to know the rules to break them. That’s what I’m here for, to demolish the rules but keep the tradition”

His military style jackets are cut beautifully, with secret touches like red silk lining, lines of intricate buttons and embroidery.

The show continues through dramatically lit rooms, each dedicated to a different theme or collection and packed with various pieces.

One of the most haunting images is of an ethereal Kate Moss, who appears as a hologram of sorts in a billowing dress, cascading down in layers of silk organza. The dress formed the finale of The Widows of Culloden, a show from 2006, and Kate appeared using a visual technique from the 19th century called “Pepper’s Ghost”.

Firstly, you see the dress itself, with waterfalls of creamy silk and rough edges. Then you turn a darkened corner to look into a prism, where a tiny dot of light appears, morphing into willowing wafts of smoke. These plumes of light turn seamlessly into the silhouetted form of Moss, who moves in slow motion as the dress waterfalls around her, before she transforms back into shadow, then light, then a tiny ball once more.

In the Cabinet of Curiosities, the walls are filled with different headpieces, shoes and accessories that were designed in collaborations with designers like Philip Treacy and Shaun Leane. When you sit in the centre of the room, you can take in all of the pieces around you, as well as screens filled with images of the pieces on the runway. One of the videos shows the infamous spray painted dress, a white number which was painted by robots, live on the catwalk. The dress itself is in the centre of the room as well. 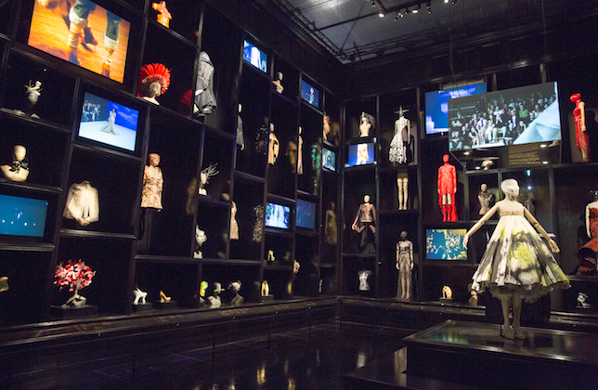 “I oscillate between life and death, happiness and sadness, good and evil"

McQueen would be the first to admit he had a dark side, which he took pleasure in exploring.

This is apparent in almost all of his pieces – dresses feature sharp, sometimes shocking aspects. But what comes across, above all, is the impeccable skill this designer embodied. The clothes framed the female form perfectly, and turned those who wore them into fearless warriors.

“I want to empower women. I want people to be afraid of the women I dress.”

If you get a chance to see these clothes close up, then you need to grab the opportunity with both hands.

Alexander McQueen: Savage Beauty runs until August 30th. Tickets are available online and selling out fast, with a limited number for sale in person each day (be prepared to queue as soon as the museum opens) See more at  vam.ac.uk. 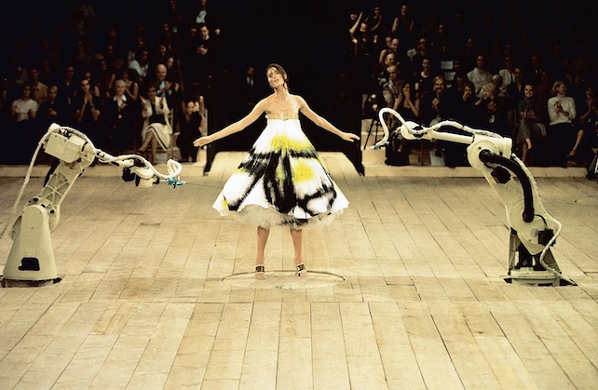