Art Exhibitions at The Marylebone Hotel

While for some hotels, the paintings that adorn the walls are design elements rather than focal points for guests, at the Marylebone Hotel – they’re trying something different! It’s hardly surprising, given both their long-standing association with literature and the arts, and the fact that they’re a go-do destination for critics and buyers alike when the Frieze Art Fair rolls into nearby Regents Park every October. As such, the hotel’s proprietors wanted to make each guest’s journey through the building as visually engaging as possible.  Rather than passive imagery flanking your walk from bedroom to breakfast or meeting, some serious thought has gone into the Marylebone’s art. To help with this exciting project, they’ve engaged the folks at  Rebecca Hossack Gallery – with two spaces nearby in central London and one in New York – to lend some expertise.

The gallery helps to put on stunning temporary exhibitions of work on the Marylebone’s walls, rotating roughly quarterly. “It’s a huge space to fill,” Molly Hughes-Hallett of Rebecca Hossack says of the hotel, which is home to around 25 pieces between exhibition pieces and permanent parts of the collection. “The walls and furniture are quite dark, so it really works for something that stands out.”

Anne Middleton, an Australian artist who displayed in the autumn of 2013, fits that bill, with paintings of almost photorealistic, succulent fruit splashing against the darker walls. The need to fill a spacious hotel with works, rather than simply a small gallery, means that artists tend to be well-established; indeed, Middleton had just finished her exhibition at the Rebecca Hossack itself when it moved in to the Marylebone.

Initially, the temporary shows were confined to the hotel’s long corridor, but as the project grew, the art demanded more space – which the hotel was more than capable of providing! Now, the plan is to expand these amazing images further into conference rooms and bedroom corridors. For The Marylebone, this is about bringing something bright and exciting to guests’ internal trips.

Business travellers might be short on time, but the idea of exhibiting such fresh, exciting work is to give every guest a reason to stop – to appreciate these beautiful curated works, and the thought that’s gone into their selection. The next exhibition is perhaps even more likely to appeal, given the nature of a hotel’s well-travelled clientele. Laura Jordan, the most popular artist on Rebecca Hossack’s books, produces cityscapes that portray some of the world’s great metropolises. There, in stylised form, is Rio de Janeiro, New York, Hong Kong and, of course, London. World travellers are sure to stand still for a moment to reflect on these breathtaking urban images.

Alexander MacKenzie, another Australian artist from Rebecca Hossack’s stable, went down exceptionally well earlier this year too, with a collection of evocative, moody landscapes. “His works are quite mellow, and fit well in the space,” Hughes-Hallett notes. “We do tailor what works fit where, and what would suit the hotel,” she adds.  Indeed, far from sitting on a regimented line of spots on a bare wall, the hotel is open to creativity in terms of showcasing the art. So, particularly striking pieces are often displayed prominently - even in windows - as the stereotype of purely functional art is well and truly broken. 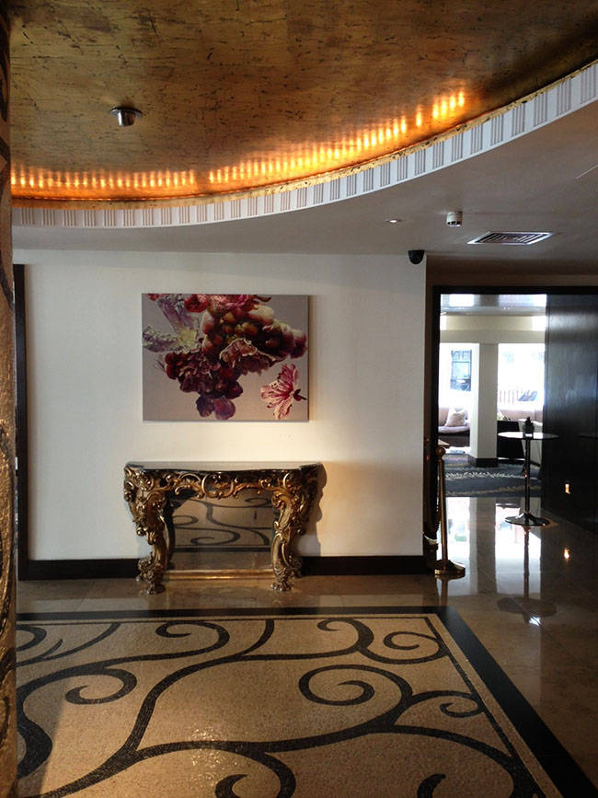 The response to the work has been overwhelmingly positive so far, both from hotel guests and visitors to the opening events that most of the exhibitions bring. This art invites something of an exciting and vibrant world within London to hotel guests without even having to leave – though of course a simple step outside the front door brings them to any number of small and large galleries, in an art-mad quarter of the city.

With The Marylebone delighted to engage with this vibrant local art community, and the gallery fielding requests from non-guests for directions to particular artists’ work, it’s a partnership that works beautifully - and the hotel is looking forward to continually making itself as hospitable a home as possible for art.

Karl McDonald is an Irishman living in London. In addition to working as a production journalist for The Independent, he writes about music, books and city culture for various publications.