Gigs over the ages 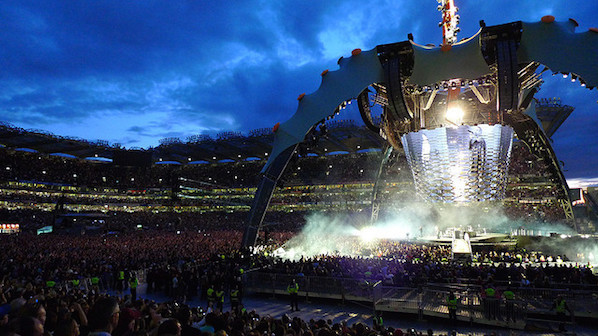 There are only a few weeks left before Bruce Springsteen takes to the stage at Croke Park, swiftly followed by Beyoncé in July. As the country counts down the days to what will surely be gigs to remember, Croke Park gets ready to transform into a musical venue fit for the music world’s king and queen.

Over the years, some real icons have graced the sacred Dublin field, replacing the hurleys with guitars and the sliotars with drum kits. Croke Park has been home to some performances that have stood the test of time, and stand out in the musical history of Dublin. Bon Jovi, Tina Turner, Neil Diamond and Westlife have all performed in the past, and many more legends are sure to follow.

As this year’s gigs draw ever closer, we’ve found some past performances that are still talked about to this day.

The most recent star to set the stage alight was Ed Sheeran, who had a two-night sell-out run in 2015. While his gigs may have avoided the high-octane effects and glitz of some of the big showstoppers, he proved that one man and a guitar can entrance a stadium full of fans. One of the most talked about moments was his performance of The Auld Triangle, for which he was joined on the stage with Kodaline and Glen Hansard. You can watch a fan’s video of the song below.

It’s only right that the band most synonymous with the Irish music scene have taken to Croker for many runs in their previous world tours. The kings of the 360° stage set up, their platform is ideal for Croke Park, with the band often rising from the hallowed turf on the pitch. U2 have played in the stadium more than any other act, going right back to gigs in 1985. The following is a rare clip from The Unforgettable Fire Tour in 1985.

When one of the world’s biggest boybands reunited for the first time in 16 years, the tickets sold out almost instantly. Joined by Robbie Williams, Take That played in Croke Park as part of their Progress Tour in 2011, with a hugely elaborate stage set and a back catalogue ranging 20 years to get through.

If any band has a back catalogue to rival Take That, it’s The Police. 2007 saw the band rip through a set list of hits, including ‘Message in a Bottle’, ‘Roxanne’ and ‘Every Breath you Take’.

Just like The Beatles and Take That before them, One Direction has the power to reduce legions of teen girls into a tearful hysteria. So when they announced their Croke Park gigs back in 2014, there was no question about the crowds that they would bring. The boyband used runways, ramps and raised podiums to utilise every inch of the stadium and make the dreams of teenage fans come true. The gigs finished with an epic display of fireworks.

The Bruce Springsteen gigs are sold out, but there are still tickets remaining for Beyonce. You can see more about Croke Park concerts on their website.