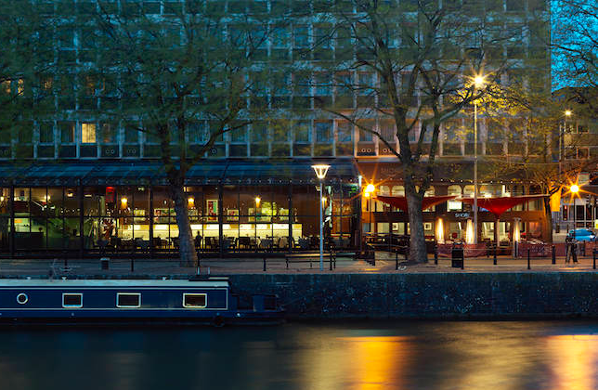 People spying on the colourful houseboats, admiring the historical ships in the dock, or just drifting from café to bar.

The harbour is the life and soul of the city, and there’s no better way to drink it all in than a boat tour with the Bristol Packet Company.

From one of their quirky boats, you’ll drift along the docks and learn all about their history, as well as discovering the best places to pop into when you’re back on dry land. The itinerary can change, but you might see barges that have been converted into bars, the bridge that gave Bristol its name, or even the old Fry’s chocolate factory, where the first bar of chocolate in the world was created in 1847. It was also the spot where the world’s first Easter Egg was ‘hatched’ in 1873.

You’ll swing under low bridges, past old warehouses and factories (which are now swish apartments) and you may even spot an Inky original. Inky is a good friend of Banksy, and he replaced one of his pictures on Theckla, a ship now adorned with Inky’s work. While it looks like a regular ship from the outside, it’s actually one of Bristol’s hottest nightspots.

You might even pass one of the city’s best-kept secrets – the Bristol Buttery is where you’ll supposedly pick up the best chips in town, according to tour guide Sam.

The Bristol Hotel have teamed up with the Bristol Packet Company to create a fantastic break away in the city. The Discover the Dock Package includes:

The package is bookable from 20th July to 31st August, subject to availability.

You can see more about the package  here.