Blog (How it feels to run the Cork Marathon)

How it feels to run the Cork Marathon 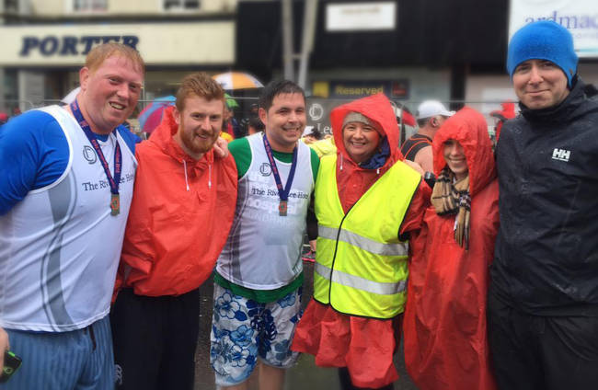 Most of us would struggle to run for more than a few minutes, but on June 1st, hundreds of people conquered a route through Cork, covering a distance of 26 miles and 385 yards.

In among the crowds were two employees from the River Lee Hotel; Conor Mc Dowall who completed the half marathon, and Paul Murray, who ran the full marathon. We chatted to them to find out exactly what goes through your mind when you run the Cork Marathon.....

How long were you in training for the marathon? How much running did you have to do each week?

Paul: I signed up for the marathon two months before, so I had to get a lot of training completed in a small amount of time. I ran 3-4 times a week, for distances of between 7-14 miles each time.
Conor: To be honest, when I started to orgainse the half marathon this year I said that I was going to do a lot more training. Last year, I did the half marathon and was zapped of energy after about 10.5 miles. So just after Christmas I started running a small bit whenever I got a chance. But because I was in middle of the rugby season, and hurling pre - season was just starting off again, trying to fit all of this in alongside work, golfing, family and girlfriend time was pretty hard. As the rugby season started to finish, and the hurling season started, my road running kind of stopped.

Did you have to change a lot about your lifestyle while you were training?

Conor: I'm not a man really of change, so didn't change much to be honest!
Paul: I had to give up a lot of foods and drinks, cut down on socialising, and go running at strange times (after 1am) due to work hours. After training a few times, it was easy to sacrifice these things as I felt my body getting stronger and running started to become enjoyable.

Have you ever run a marathon before, or competed in a similar event? Did you run much before this?

Paul: I ran the Cork City half marathon last year. I would have been into pitch sports when I was younger, like hurling and soccer, but that was the first running event I did.
Conor: I did the Cork Half Marathon last year. As the hotel is one of the main sponsors for the Cork City Marathon, we like to enter in either the Full or Half Marathon and try getting a couple relay teams.

What made you want to run the marathon?

Conor: Last year I didn’t have a clue why I signed up! But when I got over the finish line, the feeling you get crossing the line is amazing. Unless you’re a professional runner, I think most people also do it for different charities, to raise money for them. So this year, I was trying to beat my time from last year and raise some money for charity while I was at it. I beat my time by 15 minutes, too!
Paul: The main reason would be for charity. The second reason would be for the accomplishment. The feeling I had crossing the line last year for the half was immense, and I could only imagine that feeling after completing a full marathon.

What was your favourite part about the training? And the marathon itself?

Paul: The best part about training was actually the feeling you get after you finish running. You can feel your body getting stronger, and it was so good for me mentally.
My favourite part about the marathon is the people. The atmosphere at the start line is great - you can feel the runners nervousness & anticipation, but most of all it’s the support you get off of people. You could be running beside a person in the relay or half marathon and when they see that you’re doing the full marathon the amount of pats on the back and words of encouragement you get were enormous. I haven’t experienced any other marathon to judge against, but the crowds of people that come out to support everyone running is unbelievable. They offer water, jellies, orange segments, but most importantly of all -encouragement.
Conor: I loved the feeling of getting fitter and being out in the open air. My favourite part of the marathon is the sight of people outside their houses cheering you on, and all the volunteers who are handing out water, oranges and jellies. This year the weather was horrible - wet, misty and very windy, but everyone was out in their wet gear shouting and cheering you along. People don't think it makes much of a difference but by God, it really does! When you think you’re running on empty, that one shout can give you that boost in the brain to spark you off.

I heard ''You’re running strong!'' so many times that I thought to myself “Yeah, I am!” The second the brain gets a sign of weakness, you’re dead on your feet. So the highlights are the accomplishment of running a half marathon, raising money and the people of Cork, who are fantastic.

How did you feel on the morning of the marathon?

Paul: Extremely nervous as I knew I had not trained anywhere near the distance I was about to run!
Conor: Brilliant! I was really looking forward to it, because at the end of the day it’s got to be fun, like everything. If you’re having fun, you’re going feel better about things.

What was the hardest part?

Conor: The hardest part for me was “The Straight Road'' aka the road that never seems to end! All throughout the course changes, and you’re taking in hills, houses, different roads, you’re jumping off curbs to pass people out. But the straight road is no joke. It's about 2-3 miles from the finish line, which is when your brain is trying to trick you into feeling pain, saying you can’t go on anymore. It’s a dead straight road, about a mile long, with no change in it at all. It's just trees to your left, cars passing on your right and no movement at all. It’s hard for the brain to stay in tack!
Paul: The hardest part for me was the mental challenge - when your mind is trying to tell you to stop, but you’re fighting with yourself saying that you can’t.

What do you think makes the Cork marathon special?

Paul: The people and the route, as you get to see most of Cork City.
Conor: As I said before, the people of Cork make it for me. They’re the nicest people you will ever meet, anywhere in the world! People who stay here in the hotel always say it too. ''You’re a legend'' is good Cork phrase for all the people who help. That’s what they all are! So thank you to the people of Cork, for getting the thousands of people over the finish line.

Would you do it again?

Conor: In a heartbeat!
Paul: I definitely will next year. I have a half marathon in Waterford tomorrow and I have signed up for the full marathon in Galway in October. I have found it very addictive!

What advice would you give to people thinking about doing it themselves?

Paul: I think the word marathon puts people off, and they would say they wouldn’t have a hope completing either the half or the full. But it’s all about taking a punt and going for it. You have to start small with your training and build yourself up, and if you miss a training don’t try and make it up, as it’s negative thinking. Go when you can.
Don’t look at marathons as a competition - people walk marathons! A good way to start would be to pick a charity close to home, and get a few friends and family members together, so you can run a relay team for the charity. Then you will have that extra motivation.
Conor: If you never done it before, do it! You'll be amazed at what you can do if you put your mind to it. I’m wishing I took my own advice here, but start small and bring your distance closer to the race distance. When you think you’re down and out, get back up and drive on. Don’t ever give up!