Blog (A Beginner’s Guide to Cricket)

A Beginner’s Guide to Cricket

Matches can (and do!) last for days, the players wear woolly jumpers, and games often break for high tea on the village green. It’s a little different at the  ICC Cricket World Cup 2015, which is taking place at the moment. Do you love cricket, but find yourself a little confused by the game?

We’ve broken it down to the simple basics, so you can enjoy the series as it plays out. 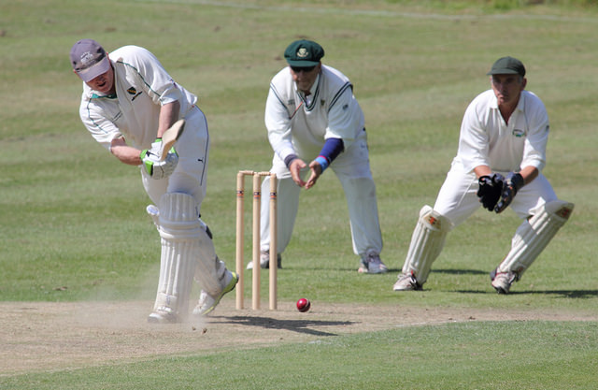 How does it work?

A match is played by two teams, and each team gets one ‘innings’. At the start of the match a coin is tossed, and whoever wins the toss gets to choose whether they want to bat or bowl first. Each innings is made up of 50 ‘overs’ (which is six ‘bowls’). When an innings is over, the two teams switch places. The batsman stands in front of the wicket, which is made up of three stumps. Standing opposite him, behind the bowler, is the alternate batsman. The bowler bowls the ball to the batsman, with the aim of knocking down the wicket and bowling the batsman ‘out’.

The batsman is aiming to hit the ball as far as he can, and as soon as he does, he runs towards the other wicket, trading places with the other batsman. They continue to run back and forth while the fielders retrieve the bowl and throw it back to the bowler. If a fielder catches the ball without it hitting the ground, the batsman is out. Points are counted by the amount of runs the batsmen can reach before the ball is thrown back into play.

Also, if the fielding team manages to knock down the wicket when the batsman is running out of their crease (a small area next to the wicket), then the batsman heading towards that end is out.

As with all sports, the team with the most points wins!

How are points counted?

When the batsman hits the ball and it crosses the boundary of the field, having first touched the ground

How is a batsman dismissed, or knocked out?

There are ten ways for a batsman to be dismissed. The three most common reasons are as follows. If a fielder or the bowler catches the ball after the batsman has hit it, he is out. If the bowler hits the wicket with the ball, or the batsman himself knocks the stumps, then they are out. LBW or “Leg Before Wicket” is another – if the ball hits the batsman (but not necessarily the leg) and the umpire decides that the ball would have hit the stumps, he is out.

Why do the players cry “Howzat?”

This is how the fielding team asks the umpire for a decision regarding whether a batsman is out or not.

Why do the matches take so long?

The average one-day match (as are played in the World Cup) is limited to 50 overs (which equals six bowls apiece) and usually lasts around eight hours. A test match can last up to five days!

Did you say something about high tea?

I did! Cricket tea is a quintessential tradition, and takes place around half way through a match. However, it’s more of a village team tradition, and doesn’t take place during the world cup. Unfortunately.

They are all fielding positions, as well as being funny words.

Do Ireland have a chance at the World Cup trophy?

This is a question for the experts, so who better to ask than George Hook?

“The aim for Ireland cricketers is the same as the Irish rugby players.  ‎The most important thing is to reach the knock out stages.  Ireland is not a test country so reaching the knock out stages would be a great help to their objective of becoming a test nation!

Winning the World Cup is not the issue.”

With the way the team is playing at the moment, it seems like they’re well on their way.

When are Ireland playing next?

After a triumphant win on 25th February, Ireland are next playing against South Africa on 3rd March. You can see up to date match information on the ICC website.

The River Lee Hotel are sponsors of The Cork County Cricket Club, which celebrated its 140 year anniversary last year. It’s located in the Mardyke, just a ten-minute walk from the hotel, and you can see more on their website.