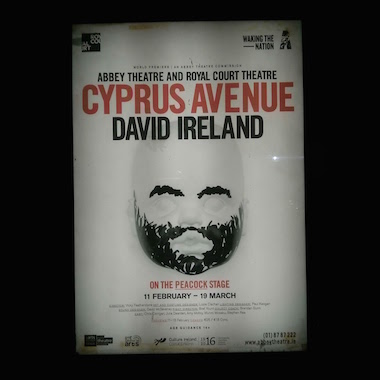 The Abbey Theatre is one of the most treasured spots in Dublin, showcasing the best productions from Ireland and around the world. Currently showing in the theatre is the world premiere of Cyprus Avenue, a play by David Ireland. We went to the one of the performances to check out why it’s one of the hottest tickets in town…

The Peacock stage is intimate, with seats arranged around three of its edges. The scene set is a sparse one, with a few sofas and low tables upon it. When Eric Miller (Stephen Rea) enters and sits, slumped in his chair, the audience is an extension of the stage, in what we soon determine is a therapy session.

Eric is talking, somewhat reluctantly, to his therapist Bridget (Wunmi Mosaku). Through her attempts to coax out more of his story, we learn about his life as a Belfast Loyalist, and his family – his wife Bernie (Julia Dearden), daughter Julie (Amy Molloy) and Julie’s newborn daughter.

The new addition to the family is the catalyst of the story. Interspersed throughout the discussion with Bridget are a series of flashbacks, in which Eric recalls situations with his family. As the story unfolds, we see the incident that kick-started this drama. When Eric is coaxed into holding his granddaughter, while his wife and daughter eagerly ask who he thinks she looks like, he switches from a coo into a roar.

‘Gerry Adams has disguised himself as a newborn baby and successfully infiltrated my family home.’

Now Eric has to try to convince others what he believes to be true – that his granddaughter not only looks like Gerry Adams, but is in fact the Sinn Fein leader himself.

The remainder of the play undulates between moments of black comedy, raw emotion and fairly stark horror. Eric struggles with his identity – what his role is in this new Ireland, how he can preserve his heritage and what he needs to do in order to accomplish this.

Cyprus Avenue is a play filled with an almost painful honesty, pulling nervous giggles as well as shocked gasps from the audience. All at once darkly funny and deeply unsettling, this is a play that stays with you long after the final actor leaves the stage.

Cyprus Avenue is a co-production with London’s Royal Court Theatre, and is running on the Peacock stage of the Abbey Theatre until 19 March. You can see more about the production here.

Listen to a podcast with Artistic Director of the Royal Court Theatre director, Vicky Featherstone, talking about the alchemy of writers, celebrating playful energy and the brilliance of David Ireland.

The Westbury is the perfect location for theatre breaks, and the concierge team are more than happy to organise theatre tickets. The Breakfast with our Compliments break includes…

Prices from €260 per night. You can see more here.