Blog (Exploring The Dublin of James Joyce: A Guide Map)

Filed under:
The Westbury
Written by
Daniel Gray

Exploring The Dublin of James Joyce: A Guide Map 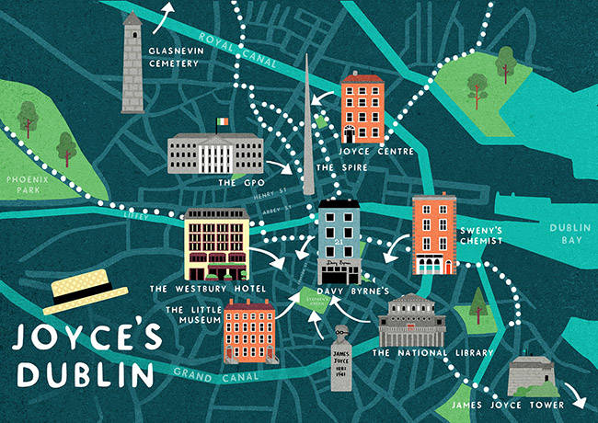 Argentina's most prominent writer of the 20th century Jorge Luis Borges visited Dublin for the 100th birthday of his Irish counterpart, James Joyce, during 1982's Bloomsday. Borges had turned blind, just like Joyce before him, but in a beautiful interview with the poet Seamus Heaney made during his visit the South American  he said he reveled in "walking the imaginary landscape", able to build his own vision of Dublin from the sprawling epic Ulysses, the short story collection Dubliners and the novel Portrait of the Artist as a Young Man which had been such an influence on him for so much of his life.

If you have read Joyce's masterpieces, it's likely that, like Borges, you'll have your own imaginary impression for your time in Dublin – if you haven't, it's just as likely that Joyce's writings will play a part in how you experience the city during your stay. As the novelist's international cult grows year on year, 21st century Dublin has fully embraced one of its most preminent sons, both in the annual Bloomsday festival and beyond.

While the James Joyce Tower, the iconic seaside martello tower where Ulysses begins, is currently undergoing a makeover, North Great Georges Street's Joyce Centre is a fitting start for any literary-minded visitor. Home to a collection of artifacts, workshops, readings, lectures and resources set in the city's historic northern Georgian Quarter, the Centre is the beating heart of Bloomsday, hosting breakfasts and street parties on the annual 16th June celebration.

The Westbury Hotel is a convenient base for those wishing to immerse themselves in the Dublin of Joyce's past. Sweny's Chemist, on the nearby Lincoln Place is the subject of one of Ulysses' finest descriptions: visit it today and you'll find it almost identical to the pharmacy described in the book. Not only is the Chemist home to some immersive readings of the man's plays and novels amongst ancient potions and yellowed medical books, but you can pick up your own bar of the famous lemon-scented soap Leopold Bloom buys in Ulysses for his wife, Molly.

Also in the vicinity is the National Library of Ireland, scene to Ulysses' Lestrygonians episode and now home to Joyce's notebooks and manuscripts. The Library is also an invaluable source for family history research, houses exhibitions of other prominent Irish writers and artists and is one of the city's most beautiful buildings to boot. Just up the road is the Little Museum, which collects ephemera weird and wonderful from the last century of Irish history. More morbid Joyceans can find a death mask of the writer within.

"Nice quiet bar. Nice piece of wood in that counter," Joyce wrote of Davy Byrnes' pub, 21 Duke Street – now that it enjoys literary institution status it may not be as quiet as in Joyce's time, but its 1930s interiors, enviable wine cellar and freshly-caught seafood has kept it in fashion for the last 100 years. To get in the culinary spirit of Bloom, you'll want to order a gorgonzola sandwich and a glass of burgundy

A trip outside of the city centre to Glasnevin Cemetery not only affords an insight into the Hades scene from Ulysses, but offers a Joycean tour that takes in the family grave as well as the other gravestones and landmarks that make up the chapter. Other literary and historic icons, such as Brendan Behan and Michael Collins are buried in the historical graveyard – their highly-regarded tours will keep you from getting lost amongst the headstones.

Of course, to dive into the world of Dubliners and Ulysses is to dive into Dublin itself. Two streets over from the Westbury Hotel is Grafton Street, the city's main shopping district. Bloom describes the "windows of Brown Thomas", the street "gay with awnings", the trees of Stephen's Green, where a bust of him now stands as "fragrant of rain". Find a bench in one of the many parks, a seat outside in the streets teeming with cafés and bar and dig into your copy of one Joyce’s evergreen books and watch the beauty of Dublin unfold before you.

Daniel Gray is the editor of  Totally Dublin magazine and guest editor for The Irish Times. He writes on urbanism, culture, society and music, and has been featured in Vice, Image, Visit Dublin and Le Cool. Daniel tweets at  twitter.com/drquirkeys.