Blog (5 Iconic All Ireland Finals - The Experience of a Lifetime)

Filed under:
The Croke Park
Written by
Alan Smullen

5 Iconic All Ireland Finals - The Experience of a Lifetime

Iconic magazine National Geographic once described attending an All Ireland Final as “the experience of a lifetime”, and you will not find any dissenting voices here!

Steeped in history, culture and tradition, the Gaelic Athletic Association (GAA) has played, and continues to play, a pivotal role in shaping Irish national identity.  The sports of Hurling and Gaelic Football are played virtually all year round, climaxing each September when the two best county teams in the country in each sport, compete in the All Ireland Finals.  The grassroots of the GAA can be found in every town and village, in every school and parish in this country, and beyond.  The local GAA Club is the lifeblood of so many communities, and what joy when a local player rises to the top to compete in an All Ireland Final, vying to claim the Liam MacCarthy (hurling) or Sam Maguire (football) trophy and bring it back home for all to see.  The All Ireland Final day is the concluding fixture on the Inter-County calendar, and are two of the biggest sporting occasions of the year – if you get the chance to go, don’t dream of missing out!  And to whet your appetite for the Football Final on Sunday 20th September, we take a look back at five All Ireland classics of the past.

Ask any ‘Dub’ where they were on the day Kerry were left distraught by the left boot of Stephen Cluxton, and they’ll recall it with crystal clear verve, pride filled chests and a hint of a tear in their eye.  Dublin were stuck in a 16 year drought in their quest for Sam, while Kerry were aiming for their fourth success in six years.  Sixty-five minutes on the clock and Dublin super-sub Kevin McManamon rattled the back of the Kerry net to send Hill 16 into raptures.  A Kevin Nolan point levelled the contest and with the game destined for a replay, Dublin were awarded a free-kick deep into injury time.  Captain, and Goalkeeper, Stephen Cluxton nonchalantly jogged up the Croke Park pitch, with over 82,300 pairs of eyes in the stadium glued to his every move...he placed the ball, took a few steps back, and gently stroked the size 5 between the posts...Hill 16 shook with the roar of the Dublin crowd and Sam was on his way back to the capital once more.

In some ways this was one of the most infamous of finals, with the 1996 replay remembered as the day chaos and a red mist descended onto the field at Jones’ Road.  Just over five minutes in and after a speculative high ball was sent into the Meath defence, a huge brawl developed involving 27 of the 30 players on the field, in the corner of Hill 16 and the Cusack Stand.  While lasting only half a minute, the incident led to umpire Francie McMahon rather eloquently telling referee Pat McEnaney that “You’re going to have to send off Colm Coyle, he’s after dropping ‘bout six of them”.  Meath’s Coyle duly received his marching orders, along with Mayo’s Liam McHale, but the Meath men were to emerge triumphant in one of the most talked about finals in generations. 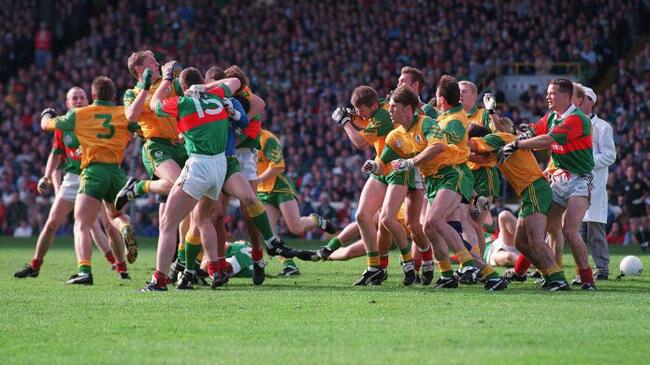 Dublin entered this final as clear favourites, with Donegal seen as rank outsiders.  It was obvious after a short while that this message had bypassed the Donegal team, they had other things in mind!  With Manus Boyle peerless for the Donegal men, Dublin found themselves behind by three points at the half way mark, after missing a penalty in the opening exchanges.  With over sixty-four thousand people in attendance, referee Tommy Sugrue blew the final whistle and atop of the Hogan Stand steps, in his unmistakable Donegal accent, team Captain Anthony Molloy announced to the world those famous words, “Sam’s for the Hills”. 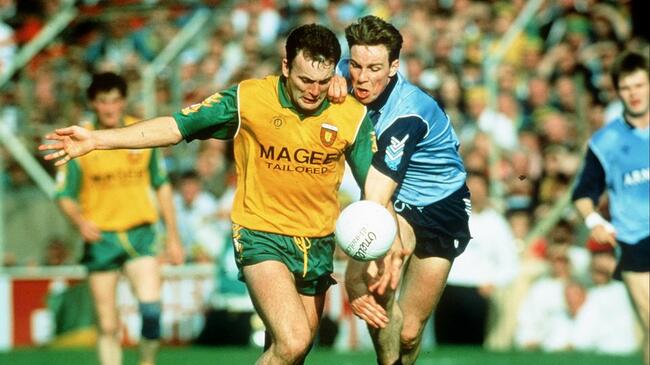 The Kerry team of this era are looked upon as probably the greatest football team ever, but for all their successes, it is often the ’82 final against surprise-package Offaly that is most remembered.  In this Final, Kerry were hot favourites to claim an unprecedented fifth All Ireland title in a row – they had not lost a Championship game since the Semi-Final of 1977.  Even with legendary names such as ‘Bomber’ Liston, ‘Ogie’ Moran and Paidi O’Se on the Kerry side, this day was to belong to the great Seamus Darby from Rhode, Co Offaly.  On quiet winter nights in Killarney and Dingle, you still hear hushed talk of ‘that push on Tommy Doyle’, but when Darby won possession and rifled the ball over Charlie Nelligan into the net, Offaly Gaels across the world were united in ecstasy, their team were ahead by a point in the last moments of an All Ireland Final.  In true David vs. Goliath fashion, Offaly hung on desperately and were crowned All Ireland champions for 1982, with Seamus Darby entering the GAA history books for the most famous goal ever scored!

An iconic moment in the illustrious history of the GAA, the All Ireland Final for the first time ever (and only time since) was played outside of Ireland in 1947.  The decision to play the final in New York was made to commemorate the 100th anniversary of the Great Famine, with The Polo Grounds chosen to host that year’s contest.  With the travel arrangements made, the teams arrived on USA soil on the 9th & 10th September.  The Cavan men were accommodated at the Hotel Empire, while Kerry settled into the Henry Hudson.  After mass at St Patrick’s Cathedral on the day of the final attended by the full travelling group, the two teams arrived at the Polo Grounds ready for action.  Cavan full-forward Peter Donahue scored 0-8 from free kicks to deliver Sam to Cavan once more.  Such an impressive display from the dead-ball specialist resulted in Donahue being compared to baseball icon, Babe Ruth, in the local press. 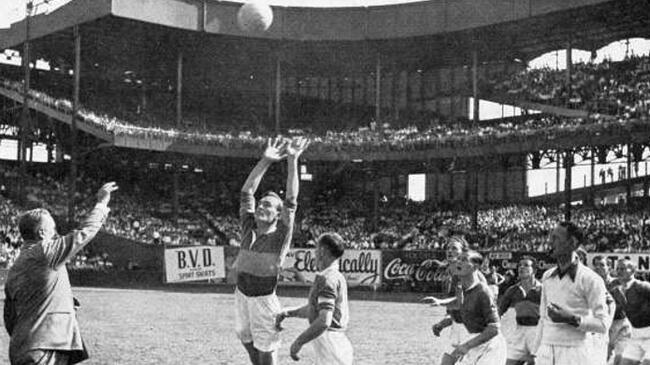