The woman behind the creative explosion!

Celebrating the rich cultural tapestry that makes up Bloomsbury, it's annual festival brings together the community with a two-day extravaganza of art, music, science and literature, choreographed by festival director Kate Anderson. We caught up with her just after the event to find out how she pulled it off 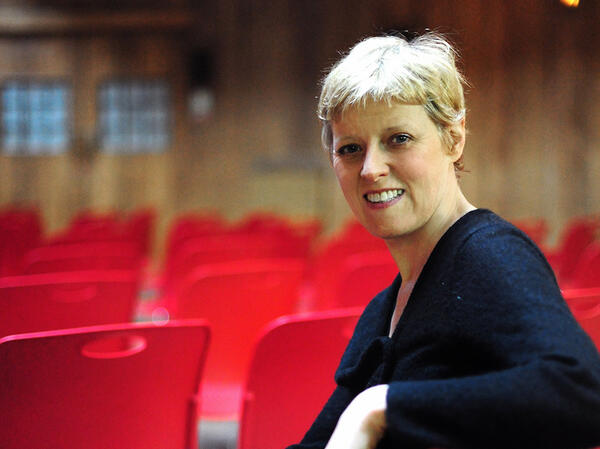 Hi Kate, thank you so much for taking time out to talk to us about the festival. How did it go?

It was a great success – we were so pleased. This was our second year, having re-launched the Festival in 2015.  We had over 170 individual events all original and ‘made in Bloomsbury’ ranging from Last Whispers: Oratorio for Vanished Voices, Collapsing Universes and a Falling Tree– an immersive installation by artists Lena Hertzog at the British Museum, to a pop-up performance of A Song for Coram’s Fields. The Festival is multi-genre: arts, performance, science, literature, etc, and it connects our whole community. We are now in the middle of our evaluation so don’t yet know the number of audiences that attended but anticipate that it will be about 25,000.

What was the idea behind the ‘language’ theme.

2016 was the centenary of the opening of SOAS – the School of African and Oriental Study which is based in Bloomsbury. SOAS is renowned for teaching languages and it also hosts the Endangered Languages Programme, which seeks out and creates an archive of languages that are in chance of becoming extinct. Once we thought of language as the theme, we realised that it was a particularly apt topic for Bloomsbury, which has a very cultural diverse community, made all the more so by the number of international students in the area.

And what is the aim behind The Bloomsbury Festival as a whole? What drives it?

The Festival was first launched in 2006, and the starting point was about celebrating the achievements in the area and drawing its community together. Over many years it grew and grew and became particularly well-known for putting on a family-orientated two-day event in Russell Square. However changes in funding, artistic and audience taste meant that in 2014 the Festival decided to take a pause in its production to reassess its vision and future plans. We re-launched the Festival in 2015 with a new vision to work as creative catalyst in Bloomsbury, producing and showcasing work with the broad range of professional and non-professionals in the area. Basically, we create projects with the area’s leading artists, scientists, and academics, with those at the beginning of their careers, and the whole Bloomsbury community from primary school children through the ages up to the elderly. 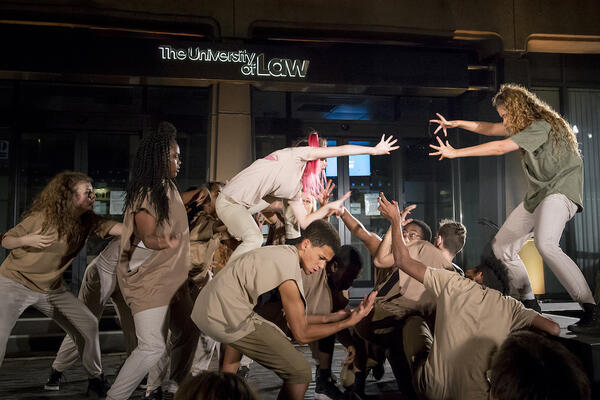 How do you go about getting the local community involved?

We are lucky to be very well-connected in the community, following a decade of the Festival’s existence. We have a database of nearly 200 local residents, businesses and institutions who are regular partners working with us to make Festival projects and a further 3,700 local audiences work keep in regular contact with us. We work across the whole year to develop the festival, including many meetings with local artists, institutions and businesses plus monthly partners meetings.  It’s a big job to create the right conditions to get everyone involved, but also great fun!

How do individuals in the community get involved?

The Festival is open to all, but the work is of a very high standard and the programmes are carefully curated, so it's not a ‘free-for-all', as such. People get involved in a variety of ways, some residents propose projects to one of our Programme Managers who will then help to shape them to fit into the programme. Also some of the shows or projects that we produce ourselves for the Festival provide opportunity for engagement – eg: Step Out Store Street (a night time street party with a twist!) involved a number of local dance groups. There are also opportunities to volunteer in a range of ways as part of the team delivering the Festival, for instance as a member of the Front of House team, or as assistants helping our marketing, or technical Managers.

Ok so now down to the actual festival. What was your highlight of the event?

Step Out Store Street was our biggest event and launched the Festival weekend, but if I can only chose one event I think it should be Calling Tree because it is so unique. Made by Rosemary Lee Associate Artist of The Place (a contemporary dance theatre in Bloomsbury) and co-directed by choreographer and movement artist Simon Whitehead, Calling Tree was an extraordinary performance and series of events in and around the trees of St George’s Gardens in Bloomsbury, which involved a small team of aerialists, singers and performers. 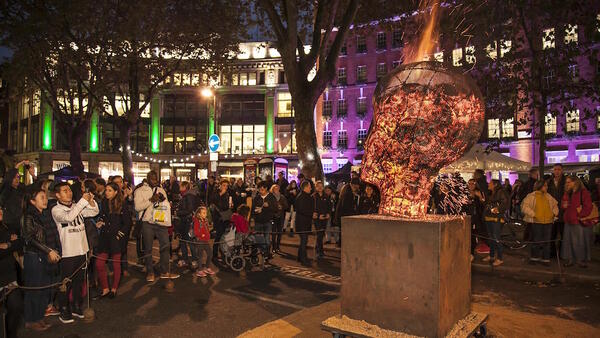 Who were the most inspiring people you’ve worked with on The Bloomsbury Festival?

That’s a hard question. We work with over 100 partners and nearly 600 performances and other participants. Each is highly creative and, almost more important, brave and pioneering. The Festival works on a tiny budget so each person proposing a project has to be pretty ingenious in order to make it happen. I am amazed and very heartened but the community effort that goes into the Festival and how leading businesses are as intrepid as artists and scientists.  If I was to choose just two examples of inspiring people this year they would be Michael Henry, composer of A Song for Coram’s Fields who worked with theatre director Emma Bernard and two of our local primary schools to make a delightful piece to celebrate the 80th anniversary of Coram’s Fields and in doing so inspired a generation of Bloomsbury children, and Professor Michael Arthur, Provost of University College London who, alongside funding the Festival and opening up the Main Quad of one of the world’s leading Universities for a day long Festival hub also (unknown to the Festival) submitted his own photograph for exhibition in the festival.

What have been the biggest challenges pulling a festival of this scale together? Particularly in London.

Money – always money! Particularly since there has been a considerable push for Arts Council to fund more projects outside London, and at the same time there is generally less funding available for the arts in recent years.

When it does all come together how do you normally feel? Do you have an idea in your head of what it will look like? Was it how you pictured?

Yes and no. I have a good idea and a plan of what we want to achieve, but of course we work with a large number of people and people always bring their own flavour to things. Also events are dependent on audiences – smaller audiences make them more intimate and larger audiences have quite a different feel. It's hard to say how I normally feel, I am not sure there is a ‘normal’ but this year I certainly feel very proud of our team and of the whole community of Festival participants as the event was such a success. 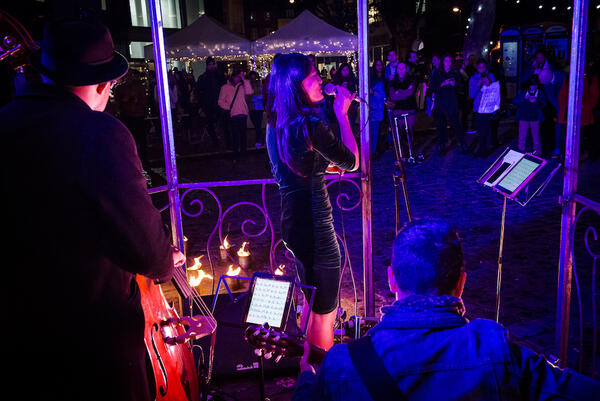 Do you feel that it really brings different parts of the community together? How important is this?

Yes. It's very important, but the impact of bringing the community together is only felt favourable in retrospect. You rarely experience the negative impact of something not happening!

Would you like to see other parts of London replicating The Bloomsbury Festival? Where else do you think it would work?

NO! I would like to think we are unique! More seriously, there are many fabulous arts events in London, but I don’t know of any other events that are professional and of a very high aspiration, and yet involve so many different sections of its community. I think this could probably only be achieved as a result of Bloomsbury containing so many leading cultural and academic institutions, and also being a residential area, which gives it a heart. 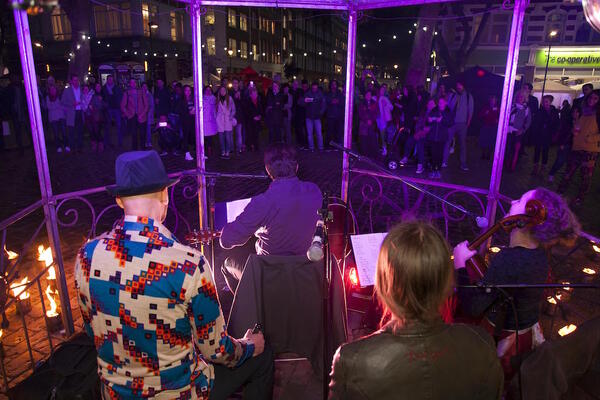 What is your opinion of the arts/culture/festival scene in London at the moment? And how people respond to it in such a digitally-dominant society?

Did you dream of being the creative director of a festival like this? Your career began in theatre, was this a natural progression for you? Or were you looking for a new challenge?

Theatre has always been my great love but after 12 years of running a producing theatre I wanted a new challenge and I have certainly got it! I expect that every director of a multi-genre Festival would bring to it the flavour of their primary art form, and I am aware that Bloomsbury Festival is more theatrical than it was just in the way that each part of it is produced. It's not that more plays are put on, but that the way we create the framework and different events in the Festival has a theatrical style.