Blog (How to make The Kensington Hotel’s signature cocktail)

How to make The Kensington Hotel’s signature cocktail

One who would greet you at the door, suss out what kind of mood you’re in and whip you up the perfect drink, based on what he knows you love.

Well, he mightn’t take up residence in your own house, but Alessandro Pizzoli is the award-winning mixologist based in The Kensington Hotel. And he is just the man you want behind a cocktail bar.

“I like to understand what guests like. I want them to close the menu, talk to me, and tell me what they like in a cocktail. For example, if they tell me they like a vodka cranberry, I know the nose of that drink, the flavours. I know from that the different notes of a cocktail I could create for them. I want people to try something different, and I think people appreciate that.”

Something different is just what one of his most popular cocktails, the Kensington Lavender, offers up. A dreamy, fragrant blend of zesty citrus, punchy ginger and aromatic lavender, the concoction is a hit originally dreamt up by Alessandro for a competition.

“I started off using rum for this coctkail, as it was a rum based competition. I wanted to create something that I would enjoy personally, so it’s a really relaxed drink. I kept it simple. There’s Cointreau for sweetness, but it’s subtle so it really lets the ginger and the aroma of the lavender shine through. 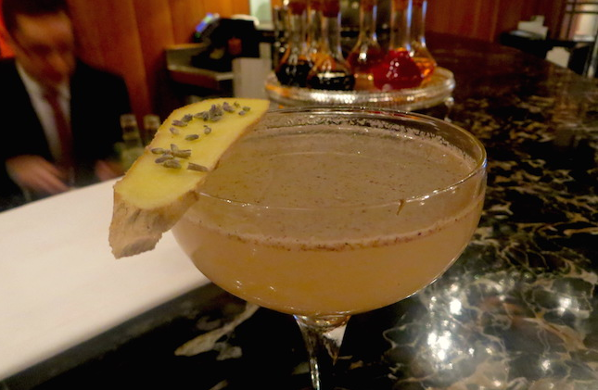 “I like really light, citrus cocktails. There’s a bit of a trend against really strong drinks – the mentality goes towards the spices and scent.”

That’s exactly what hits you first with the Kensington Lavender. The aroma of the petals hits the nose with a flowery hue, but when you take a sip it’s the ginger that makes the biggest impact. What you’re left with is a drink that’s incredibly moreish, stylish and with just the right level of kick.

You start with a shot of Grey Goose vodka, combined with Cointreau and a hefty amount of freshly squeezed lemon juice. Mix in a cocktail shaker and sprinkle in a stacked teaspoon of dry lavender petals and a measure of simple sugar syrup. Bash some fresh ginger and pop it in the mixer, before shaking vigorously. Add just a whisper of ginger beer to finish it off.

Alessandro clearly has an eye for measures and quantities, tweaking ever so slightly as he blends and working to his nose. Taste as you go to fine-tune your own cocktail to suit your tastes. 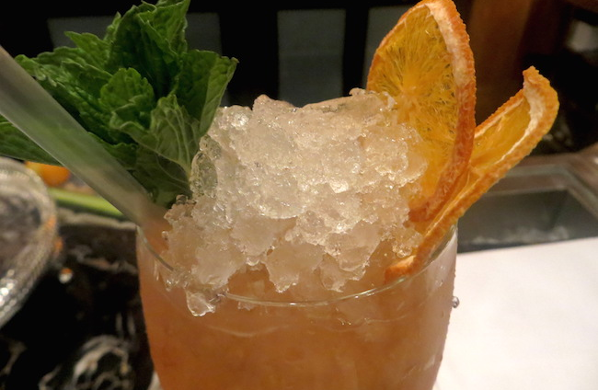 Then it’s time for the all-important garnish.

“Your garnish should give a hint as to what’s inside. What’s important to remember is that the garnish gives the first hint of a scent, and lets you know what’s inside the drink. The smell evokes memories, and then the mind can see what’s inside. I love to use fresh fruit, ginger, lemongrass… whatever my strongest ingredients are.

“I’m from Italy, which is very different to London in terms of flavours. London is a cultural melting pot, so there are ingredients used here which I’d have never used in Italy. Things like ginger, lemongrass and cucumber. I would never have used them over there, but I now I can’t do without them!”

Those elements are strong players in another of The Kensington Hotel’s popular cocktails, the Queen’s Gate. With notes of a classic G&T, the Queen’s Gate is a pithy mix of fresh mint, elderflower, fragrant lemongrass and tonic, all combined with the classically British Hendrick’s gin.

That’s not the only British classic behind the bar. In the champagne bucket you’ll find Nyetimber sparkling wine, an award-winning bottle created in a Sussex vineyard. This is often used in the Sussex Royale, a dry, spicy combination of Martini Rosso, fresh mint, orange and Nyetimber.

All of these cocktails are available at the bar at The Kensington Hotel. Read our interview with Alessandro about his inspirations here.