Blog (Meet the stars of Lord of the Dance: Dangerous Games)

Meet the stars of Lord of the Dance: Dangerous Games 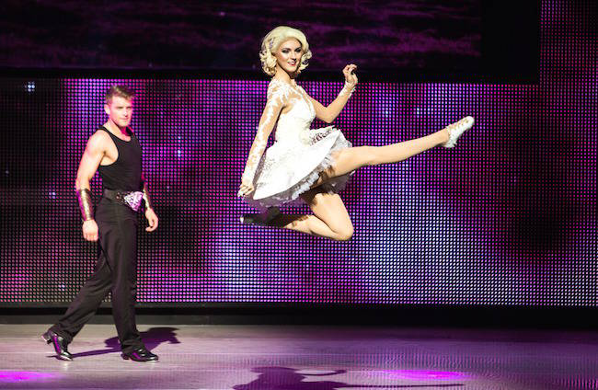 Since then, Michael Flatley has led the show in various incarnations all around the world, breaking records and setting stages alight.

The latest stageshow is Lord of the Dance: Dangerous Games, which premiered in London last September. Following a sell-out run, the show has just started again in London’s Dominion Theatre, where it will run until September 5th.

Leading the show are two incredible dancers, James Keegan and Caroline Gray. We sat down with them to find out more about the show, how they prepare for gruelling performances and why Irish Mammies can spell disaster for a dancer’s physique...

James: Dangerous Games is an updated version of the original Lord of the Dance. We opened last September in the Palladium. It’s an extension of the original, but bigger and better, and more exciting! There’s some new choreography, but the basis is still the same. It just has a bigger scale.

James: I’m from Manchester, but most of us have an Irish background. I have Irish parents, and both of Caroline’s grandparents are Irish. It’s mainly how everyone got into it. Most of us are pure Irish dancers - I’d done other little bits of ballet and tap, but the basis was always Irish dancing lessons, 4 or 5 times a week.

Caroline: My nan and granddad are Irish, and they used to look after us. They had the Lord of the Dance and the Riverdance videos, we watched those and used to run around the house thinking we were Michael Flatley! So that’s how we got into dancing in the first place.

James: We do 7 shows a week, and then it goes up during the holidays when there’s an additional matinee. We rehearse most days, but you can’t rehearse too much because the shows are so tiring on the body. One day a week, we come in early, maybe noon, and actually do the whole show, drilling the numbers and checking everyone’s still doing everything exactly the same thing. That’s what it’s all about for our show - checking everyone’s exactly in step, and keeping that sharpness.

In general, doing the show every night keeps us all fit! We do go to the gym, but it’s not for cardio or anything like that. We don’t go near the treadmill!

Caroline: We do have to really look after ourselves, and make sure we warm up and all cool down together. A lot of people do ice baths and things like that after the show. They aren’t very nice, but it definitely makes a difference! We have a physio who takes good care of us too. Injuries do happen quite a lot, but if you look after yourself you tend to be alright.

James: I need a lot of energy. Everybody gets guided on what to eat, and then it’s up to themselves. I have a big lunch, pasta or something, and then have something light before the show.

Caroline: If we’ve got, say, two weeks off between tours, I definitely take the first week off to just rest and recover. You need a bit of a break; you’ve been dancing every single day. Your body definitely needs a rest. I just sleep and eat, that’s all I do! Then after that, I try to work back up again and keep fit.

James: You need to give your body and back a break, and get some nice home food. The last break we had was over Christmas. We did the run in the Palladium, and then toured to Belgium, France, Israel… then we got the week before Christmas and all of January off. So I was thinking I could go a bit mad over the Christmas week, then get back into it. But then New Year comes, the second week of January comes, and you’re just like “Oh, no!”

I had to have a chat with mum when I first joined the show. I went back home and my mum’s Irish, so obviously her motto is just to feed you as much as you can possibly eat. Dinner would come, and there’d be five different kinds of potato. The plate would be heaving! Then you’d get up for breakfast in the morning and a piece of bacon would turn into the full Irish fry! I had to have a chat with her and tell her that Icouldeat this all day long, but that’s the problem. Stop feeding me so much!

Caroline: I don’t generally get nervous before the show, but the first thing I do is get on a track to get lifted up. As soon as I get on that track it kind of hits me! If you’ve got people in the crowd, that affects you. You always get a little bit more nervous if there are people out there that you know. Even though they’re cheering you on, you just want to do better.

James: Nerves help, I think. You need that burst of adrenaline. There are all kinds of nerves. I’m pretty lucky now; I get an excited nervous.

Caroline: You just learn how to handle it. The first show is very nerve-wracking. Your first ever show is the scariest thing you’ll ever do!

James: I have a recurring dream that I miss a cue. My dream is that I’m running backstage, and the drum rolls on, and I miss it. I’m going to jinx myself now!

Lord of the Dance: Dangerous Games is running at The Dominion Theatre until September 5th. You can see more here: http://www.lordofthedance.com

The Dominion Theatre is just seconds from The Bloomsbury Hotel. You can view their packages here.