Blog (Outdoor Cinema in London – what not to miss this summer)

Outdoor Cinema in London – what not to miss this summer 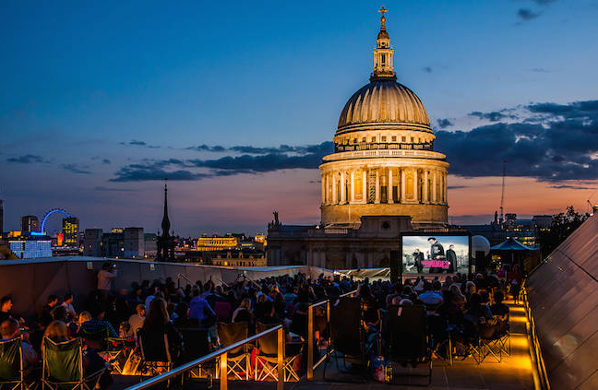 We could only see drive-ins in the movies, where teens in Letterman jackets would drive up to a cinema in their classic cars and watch a movie through the windscreen.

But now there are a multitude of options available if you want to catch a movie in the great outdoors. Over the last few years, screens have popped up all over London, screening films on rooftops, in parks and on the side of prominent buildings.

We’ve rounded up some upcoming screenings you don’t want to miss.

London is full of hidden gardens, tucked away in bustling corners of the city. The Nomad Cinema has chosen the garden of Coram, the UK’s first children’s charity, in the heart of Bloomsbury. In this little oasis of calm, a screen will be set up to play Little Shop of Horrors (13th Aug) and Singin’ in the Rain (18th Aug). Hopefully the latter won’t be prophetic. As well as the Bloomsbury location, there will be screenings all over London, including Brompton Cemetery and the Hyde Park Lido.

Where: Coram Secret Garden is a 15-minute walk from The Bloomsbury Hotel.
See:  www.whereisthenomad.com 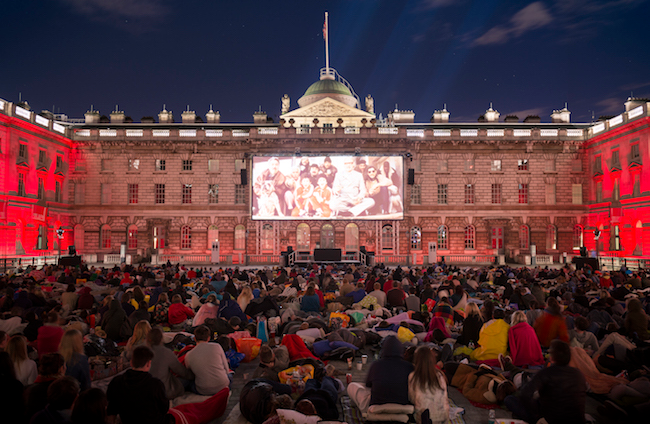 Somerset House is one of London’s finest buildings, and hosts incredible events throughout the year. In the winter, the courtyard is home to an ice rink, but in the summer there are frequent movies shown against the backdrop of the neo-classical building. This year, Film4 Summer Screen at Somerset Houseis running from 6 - 19 August. Many screenings are sold out but there are still tickets left for Princess Mononoke, The Second Mother and Me and Earl and the Dying Girl.

Where: Somerset House is a 15-minute walk from The Bloomsbury Hotel.
See:  www.somersethouse.org.uk/film

This year sees the largest season of open-air cinema in the UK from the Luna Cinema, with 120 screenings over 46 outdoor locations. In London, there are some fantastic options available, including Kensington Palace. From the immaculate gardens of the royal residence, you can see The Grand Budapest Hotel (4th Aug), The Lost Boys (5th Aug) and West Side Story (7th Aug).

Where: Kensington Palace is a 20-minute walk, or a short taxi ride, from The Kensington Hotel.
See:  www.thelunacinema.com/kensington-palace/4588919155 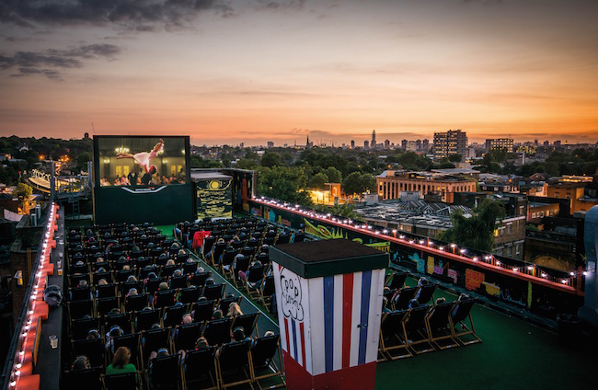 We’ve had rooftop bars, rooftop gardens and even rooftop pools. But now London is offering rooftop cinema. The Rooftop Film Club has screenings in Peckham, Shoreditch and Stratford (as well as New York) but West London isn’t forgotten. The Roof Gardens Kensington will host two screenings: Labyrinth (20th July) and Wild (21st July). Be sure to arrive early to tuck into something from the coal fired BBQ before getting cosy under a blanket.

Where: The Roof Gardens are a 20-25 minute walk, or a short taxi ride, from The Kensington Hotel.
See:  www.rooftopfilmclub.com/kensington-venue.html