Visitors to London with even a passing interest in architecture should be sure to head along to The Bloomsbury, located just around the corner from the city’s bustling Oxford Street. In the front lounge, the noble, bespectacled face of Sir Edwin Lutyens gazes silently out from behind the bar, offering a glimpse into this iconic building’s rich history.

Lutyens, a talented British architect (1869 – 1944), left his mark worldwide -from the north-east English island of Lindisfarne to far-flung New Delhi (whose administrative area is still called “Lutyens’ Delhi” in his honour!) But this, the old Central Club building on Great Russell Street, is Lutyens’ major contribution to London. Lauded as his “finest neo-Georgian building” in the capital by Martin Lutyens, Chairman of the Lutyens Trust, it’s rich with historical detail, from sturdy foundations  to elegant, pared-down façade.

The building’s colourful history began way back in 1923, when a former Young Women’s Christian Association official visited London from Australia. The city, unlike the United States, Canada and the official’s homeland, had no outlet for the YWCA. And so, an idea was born, and a campaign started to provide financial backing for a London base.

The city was supportive towards the cause; buses and shop windows carried slogans – “London, stand by your girls” – appealing for the public to support the YWCA’s campaign. And eventually, with the patronage of the Duchess of York and the support of benefactors great and small, the ambitious project was set in motion, with Queen Mary laying the foundation stone on July 12th, 1929.

Commissioned with the mammoth task of building the YWCA’s Central Club, Edwin Lutyens responded with an essay in austere and materially rich neo-Georgian architecture, listed years later as a striking example of the inter-war style by an international master.

And his legacy lives on – the building’s rich heritage is clearly apparent from the moment it comes into view. The Corinthian pilasters that flank the doorways, the original windows facing outwards and the elegant street-lamps that line the hotel’s side lane each reveal something of the internal aesthetics; bold and beautiful without ostentation.

Inside, delightful details abound. Past the portrait in the lounge, the metalwork on the stair banisters incorporates a yin-yang theme, while Lutyens’ own designed chairs and tables – recreated by his granddaughters’ company – can be seen throughout.

Still, even in a building conceived by a master, time takes its toll. A monumental renovation task faced the new owners when they bought the old Central Club in 1998. With careful sensitivity, the run-down structural and decorative features were successfully renovated, and many of the focal points of the original structure were brought back to their former glory.

The entrance-way, overseen by its architect, was restored, as were several of the building’s focal-point rooms. The Queen Mary Hall and the building-spanning Queen George V Hall still impress with scale and simplicity, while the old Chapel retains memorial plaques and details on the walls.

The cosy Library meanwhile - dedicated to the late Irish poet Seamus Heaney - is filled with old books and furniture, making it easy to imagine its original use. 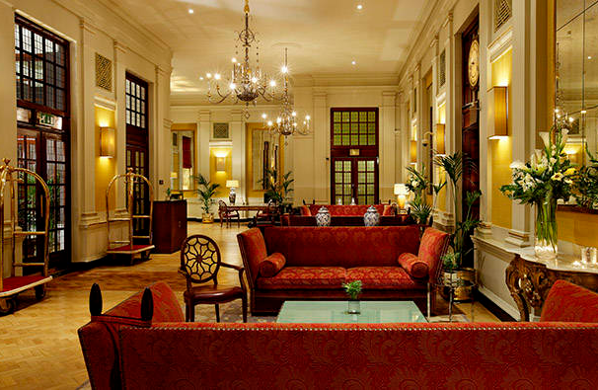 Even more exciting, you’re granted a peek into the role Lutyens’ building plays in the current Bloomsbury Hotel as you make your way below ground-level. A heavy step on the floor of one of the modern hotel’s meeting suites reveals something surprising: it’s hollow! Where you might expect foundations, there’s space. This is in fact the old swimming-pool of the YWCA, opened by the Duchess of Kent in 1939 as part of the organisation’s brief to provide entertainment and exercise for the increasingly emancipated women of London. It spans the entire building, unseen but underlying everything, and will be respected by the Doyle Collection’s planned £1m overhaul, which will restore and reopen the original pool, with added modern leisure facilities.

Karl McDonald is an Irishman living in London. In addition to working as a production journalist for The Independent, he writes about music, books and city culture for various publications.