Check out the winter wonderland! 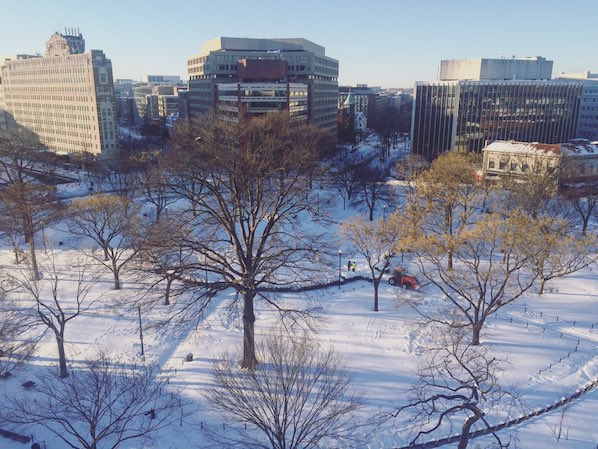 It was one of the biggest blizzards to hit the East Coast in decades, with snow reaching up to 3ft deep in some areas. Snowmageddon, as it has been dubbed, has left cities covered in a thick blanket of snow, the likes of which haven’t been seen in years. But while there has been huge disruption, both residents and visitors have seen cities like Washington D.C. as they’re rarely seen, and have been taking full advantage of it.

In The Dupont Circle, both guests and staff made the most of the storm by cosying up in the hotel, keeping close to the fire with movies, popcorn and hot chocolate to hand. But there was also an igloo built on the patio of the bar, for people to have fun outside! The hotel bar and kitchen were open for both guests and locals who braved the snow to come out for a warming meal (or cocktail!)

All the while, the storm was filling the city with snow and these rather impressive icicles…

Emerging from our weekend cocoon to see all the snow and icicles in DuPont Circle. #dupontcircle #washingtondc pic.twitter.com/TJN6RnNGpU

While everyone who could was keeping warm in the hotel, others were out braving the snowfall…

…and other people had to go to work too! Luckily, The Dupont Circle sent hot chocolate out to the TV crews who were out in the blizzard.

Thanks for sending out the hot chocolate to our crew @DupontCircHotel pic.twitter.com/yzFcaxilWu

The next day, the flurries had calmed down and everyone was out to enjoy the snow in all its glory.

But no one enjoyed it as much as the pandas at the National Zoo!

#BaoBao made herself comfortable in the snow today and munched on some sugarcane. #Blizzard2016 pic.twitter.com/RrcYfSxgbi

Tian Tian became an international superstar as the video of him rolling around in the snow was shared around the world.

Tian Tian woke up this morning to a lot of snow, and he was pretty excited about it. #blizzard2016 pic.twitter.com/GrhI9t1u7j

Want to know what it all looked like from above? A satelite captured this image of Washington D.C. under 2 feet of snow.

Washington, D.C. from space on Sunday, after being buried under up to 2 feet of snow https://t.co/0zeYxc0iTd pic.twitter.com/E7V3AfyD6e

Do you have any pictures of the snow? Be sure to tag us in on Twitter!