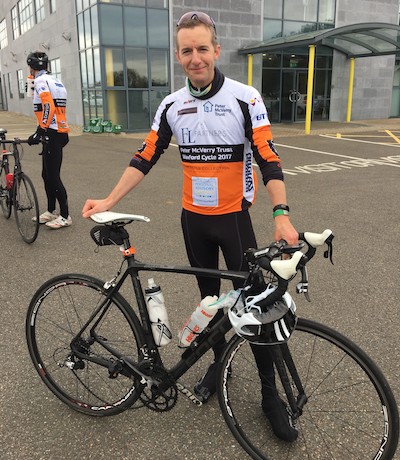 The Doyle Collection is proud to sponsor a wide array of charitable events throughout the year, both as a company and through each hotel’s connection with their city. One event that The Doyle Collection has both sponsored and participated in is the Peter McVerry Wexford cycle. Last year,  we spoke to Eddie Keelan, who completed his second cycle. This year, Kieran Doohan, CFO at The Doyle Collection, took part in the 134km event and we spoke to him about his training, how the cycle went and how he explores Dublin on two wheels.

How did you prepare for the cycle? When did you begin training?

"Unfortunately, with two kids now indoctrinated in Kilmacud Crokes, my training consists of commutes in and out of work on my beloved “fixie”.  Fortunately, I have a good base of fitness from many winter hours on a turbo trainer in a dark and damp shed!"

Do you cycle a lot usually? Where are some of your favourite places to cycle around Dublin?

"I don’t cycle as much as I would like!  Between work and family it’s hard to squeeze everything in.  However, cycling is my default mode of transport now.  As for favourite places around Dublin…in spring and summer I occasionally take a (long) detour through the Phoenix Park on my way to work, or head down to East Wall.  However, in general, interaction with Dublin traffic is a risky business and not as pleasant as it should be."

Is this your first time completing the Peter Mc Verry cycle? Why did you decide to take part?

"I was down to do the 20th anniversary cycle some years ago, but due to sickness could not complete it.  Since then Eddie Keelan, our Head of Purchasing, has taken over.  I thought this year it was time to do it. The Doyle Collection and our wider shareholder base have been supporting this worthy charity for many years, so it was great to partake."

What did you find most challenging? What was the toughest moment?

"I motored up the first hill (Calary – it helps being light!) but was caught between the first group and second.  I could see a flash of orange from the Peter McVerry jerseys every now and again but they were going too fast and for 90 minutes I tried but never did bridge the gap.  However, it meant for a nice bit of solitude, which is rare in my life these days!"

What were some of the highlights of the cycle - was there a moment that stands out?

"I regrouped with a bunch in Inch, and we pushed the pace into Wexford.  There is no greater feeling than a good balanced group working as a team at intensity. A great high!"

How did it feel when you reach the finishing line, and how did you celebrate?

"I felt great!  Although there was no time for rest…a quick shower and a dash for the bus to Dublin to get back to Kilmacud Crokes for the “7’s” and to meet up with some extended family up for the match."

Kieran will also be taking part in the 90km “Bike to Bofin”.  This is in aid of Voices for Voices For Down Syndrome alway www.downsyndromegalway.ie. His cousin Mike and his wife Ailbhe have been running this cycle since 2013, and have raised over €100k since that time.  The charity provides essential speech and language therapy to children and adults with Down Syndrome, including Mike’s own 7 year old son, Eoghan.

So far, he has raised €1,320, which will be split equally between both charities.  Kieran would like to thank each and all of his generous sponsors.