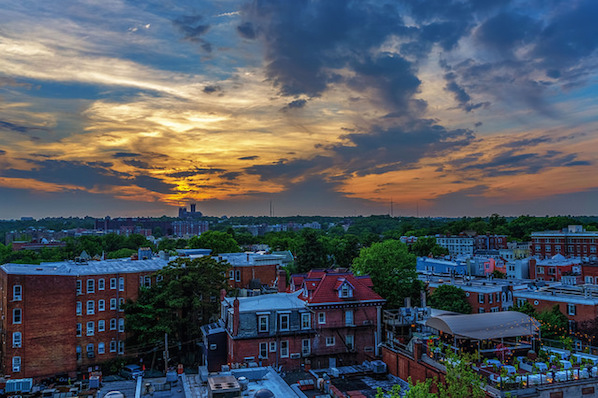 In the second of our series exploring the neighbourhoods in Washington D.C. we explore Adams Morgan. This is the spot in the city where you’ll find all the great nightlife and so much more…

This culturally diverse neighborhood is mostly known for its nightlife thanks to all the bars and restaurants dotting the 18th Street corridor.

Adams Morgan is actually much more than a neighborhood with a crowded nightlife scene. You’ll find historic row houses around 18th Street, including the Adam's Inn B&B, as well as a variety of independently owned stores. The popular Hudson & Crane offers rustic modern and industrial chic home décor from furniture, rugs, art, and lighting to eclectic gift options.

The women’s clothing store, Violet Boutique, has called Adams Morgan home since 2011. There you’ll see fun, trendy looks that are actually affordable. Men might hit the jackpot at Commonwealth, finding apparel, footwear and accessories perfect for their wardrobe.

Yogis love taking classes at Studio DC. It offers over 80 hot yoga and non-heated classes each week, so there’s something for everyone. Fitness buffs flock to Solidcore, a 50-minute, full body workout that uses slow and controlled movements to work your muscles to failure. Yes, you read that correctly.

Art lovers should all visit the DC Arts Center, an art gallery and performance space that supports emerging artists in the city. On any given day you can catch anything from Improv Wars in the theater to Facebook Photos by Poets in the gallery.

Food-wise, there’s a plethora of restaurants to choose from, such as Roofer's Union, a top spot for gourmet brats and sausages from the mind of Top Chef alum Marjorie Meek-Bradley. International spots round out the roster of restaurants, including Donburi, a Japanese restaurant serving rice bowl dishes in a minimalist space with counter seating; Sakuramen; and long-running Middle Eastern spot, Mama Ayesha’s.

Bourbon Adams Morgan (www.bourbondc.com) is your neighborhood dining saloon offering craft cocktails, beer and spirits along with dinner. This trendy restaurant and bar is a well-known spot in DC, often making the list of top foodie and lifestyle blogs in the city. (A MUST TRY). 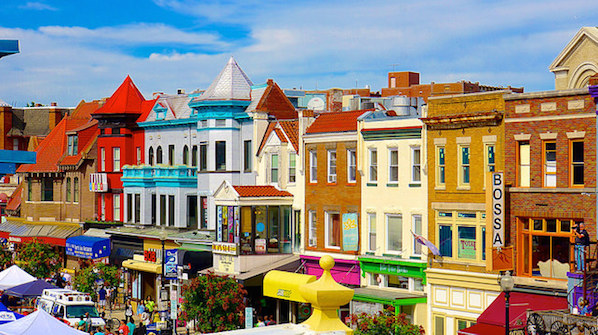 The restorative powers of a brunch can be witnessed when walking through “AdMo” on a weekend at noon. The lucky ones seated at Smoke & Barrel gorge on thoroughly rib-sticking orders of huevos rancheros with braised pork or brisket sandwiches. For a more refined experience, take to the Columbia Road patio at Cashion’s Eat Place. Perry’s, a few doors down, also attracts gatherers waiting for the first seating of its celebrated drag queen brunch. Francophiles looking for a more raucous brunch can pay homage at L’Enfant Café’s famed La Boum experience, which advertises itself as “not your grandmother’s brunch”

Few establishments boast a more robust whiskey list than Jack Rose, which sits at the southern end of 18th Street. Single malt Scotch, blended Scotch, Irish whiskey, domestic whiskey and bourbon – it’s all there. And if you’re looking for plaudits, Esquire magazine named the bar among its “Best Bars in America, 2013.” Hidden in the back of the bar is its craft cocktail-minded speakeasy, Dram & Grain.

Adams Morgan Summer Concert Series — Saturdays from 5 to 7pm from June 11th in front of BB&T at the corner of Columbia Rd. and 18th St., NW

The 2nd Sunday in September is Adams Morgan Day, an annual neighborhood festival with live music and international food from around the world. The expanded Kid's Fair has games, interactive science exhibits (in English & Spanish) clowns, and the Chinese Lion Dancers.

10 minutes from The Dupont Circle hotel on public transport.