There’s a host of exciting activities to enjoy and adventures to be had when you take to the crystal blue waters of the Potomac River...

For the outdoors type, there’s a host of exciting activities to enjoy and adventures to be had, particularly when you take to the crystal blue waters of the Potomac River...

As the capital of the United States of America and home to such notable landmark buildings such as the White House, the Supreme Court, the Jefferson Memorial and Capitol Hill, Washington DC is rightly recognised as one of the most influential and important cities in the world. But it’s not all business, all the time. Washington is also an incredibly vivacious and creative spot for a wide variety of people.

A vibrant and cosmopolitan city brimming with a lively atmosphere, Washington DC is a particularly magnificent destination during the summer and autumn months. At its heart lies the Potomac River, one of America’s most historic waterways. The Potomac has strong roots with the formation of the country itself, given that George Washington took up residence for many years along the river in Virginia before developing it as a link to the west. 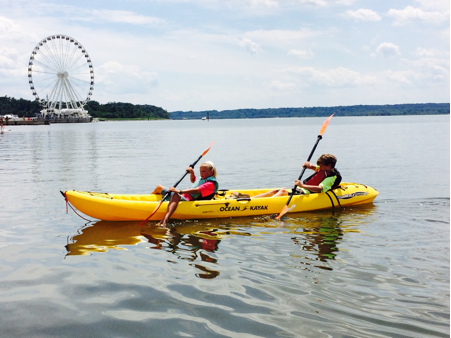 Today, the Potomac provides an awesome outlet for water sports, leisure activities and the promise of unforgettable adventure. So if you’re looking to take to the shimmering waters, why not try one of the following?

There are a variety of vehicles at your disposal when traversing the Potomac. If you’re looking to kayak, canoe, hop aboard a sunfish sailboat, paddle your way around (quite a popular celebrity pastime), sign up for programs and lessons or even join up with a competitive rowing team if you’re feeling especially limber, there are several boathouses in the area to meet your needs including Thompson Boat Center, Key Bridge Boathouse and Fletcher’s Boathouse.

Perhaps you favour a more windswept approach? The Washington Sailing Marina will get you on your way to becoming a seasoned sailor with fun and informative lessons and before you know it you’ll be throwing around terms like ‘dreadnought’, ‘monkey’s fist’ and ‘schreecher’ in casual conversation.

The Potomac is home to many types of freshwater fish such as bass, muskellunge, pike, walleye and the northern snakehead. There have even been rare sightings of bull sharks. The rapids and falls west of Georgetown are an essential fishing spot. Fletcher’s Boathouse, located along the Chesapeake & Ohio Canal, boasts friendly and knowledgeable staff so swing by before you cast that line. 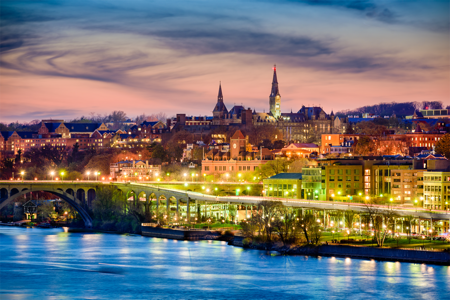 While on the waters, be sure to keep an eye out for famous birds native to the area such as the great blue heron and that most symbolic of national pride; the American bald eagle. If you wish to go exploring, why not paddle over to  Theodore Roosevelt Island? Named in honour of the 26th president of the United States, the island is a fitting tribute to Roosevelt’s conservationist spirit. Roosevelt was a firm believer in “the hardy life of the open” and as such, his island is a dynamic plain with lots to see and do, from Ranger-led programs to colourful wildlife habitats to a variety of trails for walkers and runners of all skill levels.

Every good adventurer needs a well-kitted out spot to call their base. For comfort and convenience, look no further than the Dupont Circle. Standing tall in one of the city’s most iconic neighbourhoods, this striking building is more than just an excellent hotel; it’s a cultural hub and your gateway to Washington’s finest restaurants, nightlife and entertainment. The perfect way to unwind after a day of basking in the busy sights and sounds of the city’s most thrilling environs.